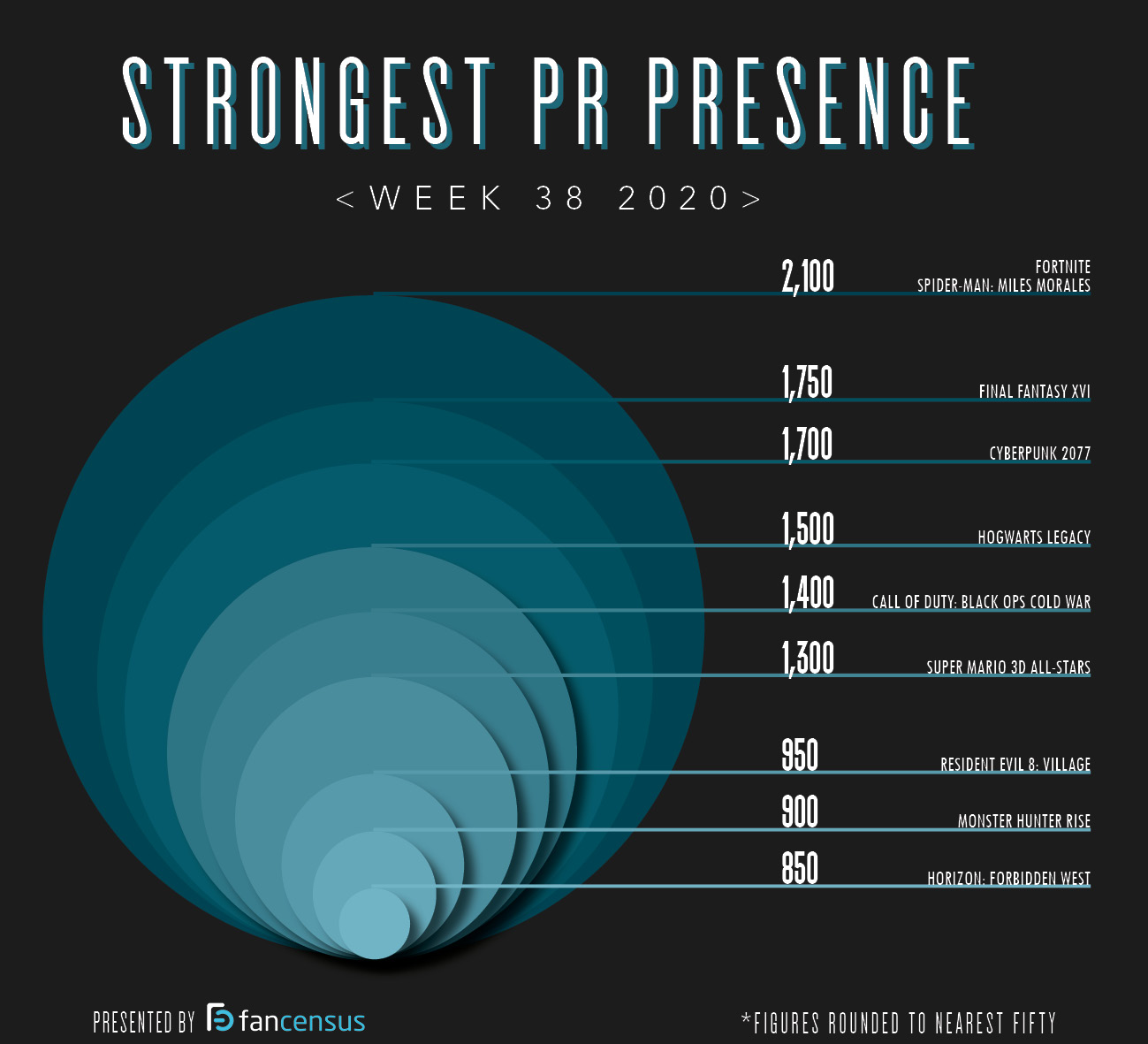 I’m not sure how many different ways we can word this, but once again Fortnite made it to the number one spot in the Strongest PR Presence Top Ten. The most covered topic for Fortnite at 17.2% was Launch Details, articles spoke about the titles upcoming launch on PS5 and the arrival of ray tracking in the form of an update. Up next was Technical Specs 16.3%, Radeon revealed a new RX 6000 range and allowed Fortnite players to explore a render of the graphics cards in-game. Guides/Walkthroughs was next at 8.3%, a mainstay in the Fornite coverage, the articles under this topic helped players complete a number of different tasks in the game.

Spider-Man: Miles Morales was featured prominently in the Playstation Showcase which took place in week 38 and as such gained enough coverage to make it in to a close second. The driving topic here was Launch Details 48.8%, the Playstation 5 got a release date and so Miles Morales also got its release date, the same day. Gameplay was the second most covered topic at 11.7% as new in-game footage was shown during the Playstation Showcase event. Leak/Spoiler/Rumour/Speculation was up next with 6.8% as outlets made predictions of which titles would be shown in the stream in the days leading up to the event.

Another title which was shown at and therefore benefited from the coverage of the Playstation Event was the newly announced Final Fantasy XVI, the number three entry in Week 38’s Top Ten. Like the previous titles, Final Fantasy XVI was mentioned extensively in articles about the PS5’s release date therefore the biggest topic for the game was Launch Details at 41.8%. The Announcement topic made up 20.3% of the XVI PR as outlets reported on the titles announce separately from articles about the PS5 event. A number of websites posted and discussed the trailer from the showcase, activity of this nature under the Trailer topic made up another 8.7% of the games press.

Cyberpunk 2077 made it into the number four position, a third Night City Wire stream took place and revealed new information about the highly anticipated CD Projekt title. One of the things which excited players and press the most was the reveal of the pc specs gamers would need to run Cyberpunk, the Technical Specs topic therefore made up 19.5% of the games PR. Launch Details was up next with 14.6%, Cyberpunk was mentioned frequently in articles list titles available at launch for both next gen consoles. The Night City Wire stream featured new footage and a similarly themed title, Ghostrunner, also got a trailer in week 38, the two of these happenings meant that the Trailer topic accounted for 12.8% of the title’s overall coverage.

An RPG in the Harry Potter Universe has been talked about for many months and during the Playstation Showcase we finally got a glimpse of our number five entry, Hogwarts Legacy. Once again Launch Details was the most covered topic at 34.9%, same as before, Hogwarts Legacy was mentioned frequently in Playstation 5 launch conversations. Like Final Fantasy previously, a number of articles spoke solely about the announcement of Hogwarts Legacy, these articles came under the Announcement topic and made up a 19.4% chunk of the game’s coverage. The Trailer topic was the third most discussed with regards the Hogwarts Legacy, the topic was worth 13.3% of the total press.

Call of Duty: Black Ops Cold War was another title that experience the PS5 Showcase boost, it landed the number six spot. As with the other titles featured in the Playstation Showcase, Black Ops Cold War’s most touched on subject was Launch Details, it made up 27.5% of the total. A new trailer for COD was shown during the presentation, this helped the Trailer topic to a 11.3% share of the press. Gameplay was up next with 11.1% as outlets honed in on the gameplay content featured within the new Call of Duty trailer.

A title which was not at the Playstation event but did release in week 38 was seventh ranked, Super Mario 3D All-Stars. As is common with a releasing title, the Review topic was the most dominant at 19%. Up next was Trailer at 15.7%, Super Mario 3D All-Stars Overview Trailer came out a few days before the game launched. Launch Details was the third most covered topic for 3D All-Stars at 9.8%, the title was featured in numerous articles which listed titles release in that week.

For the number eight entry we return to the Playstation Showcase where we saw a little bit more of Resident Evil 8: Village. In a departure from the other entries in the top ten, Resident Evil’s most dominant topic was Trailer at 34.7%. Up next was Launch Details at 29.3%, much for the same reasons as previous Top Ten entries. Leak/Spoiler/Rumour/Speculation was the third most talked about topic for RE8 at 7.5%, this came as a result of word getting out that development of the PS5 version of the game had encountered numerous issues.

Rounding out the Top Ten for week 38 is Horizon: Forbidden West. The Launch Details topic made up a huge 62% of the games coverage with outlets mentioning the title frequently in lists of games coming to the Playstation 5 and also in articles looking at which future games would be releasing on both generations of consoles. Leak/Spoiler/Rumour/Speculation was up next with a much smaller 4% as websites speculated about which titles would appear in the Playstation Showcase stream. The came the Pre-Orders topic, most of the coverage in under this topic related to the pre-order details of the Playstation console but mentioned Horizon within the article body. 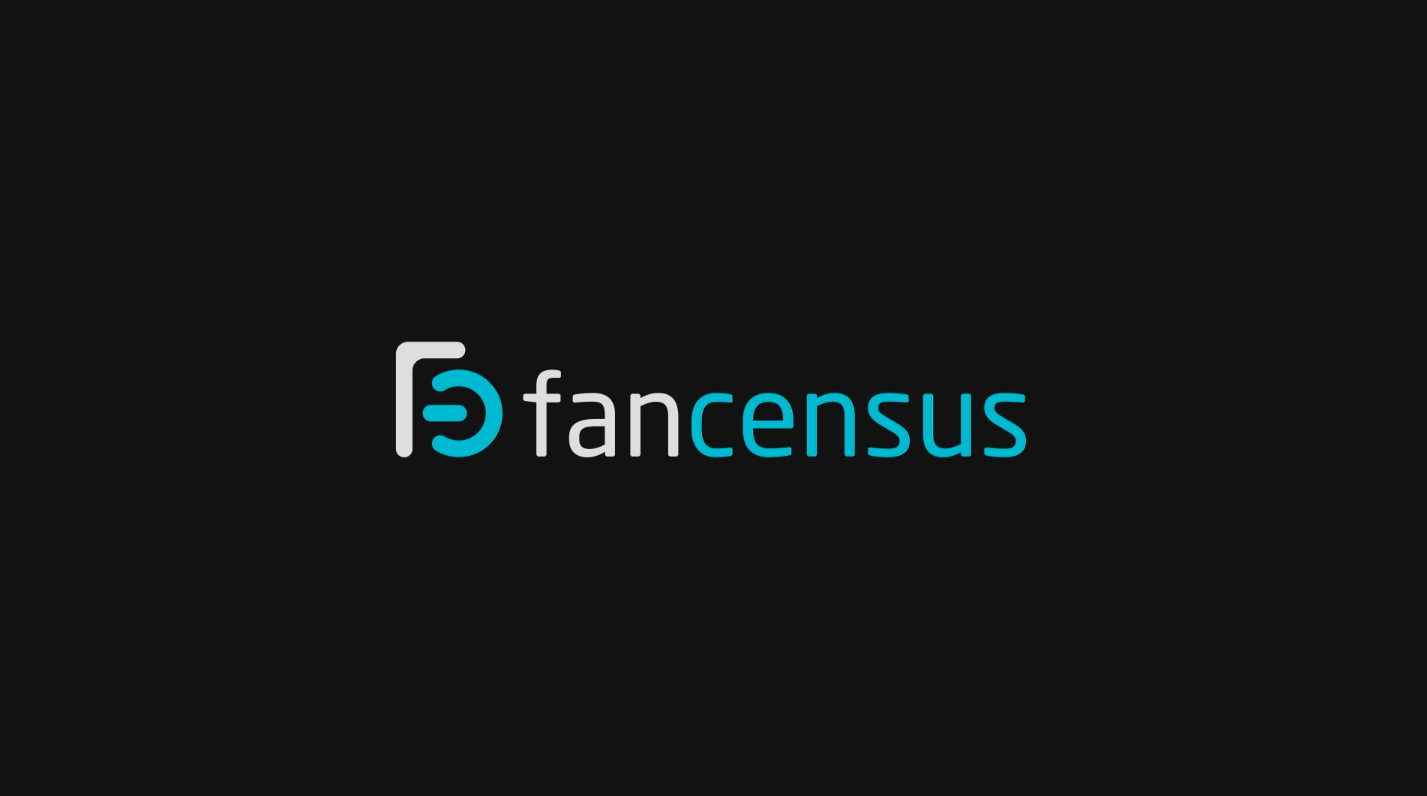