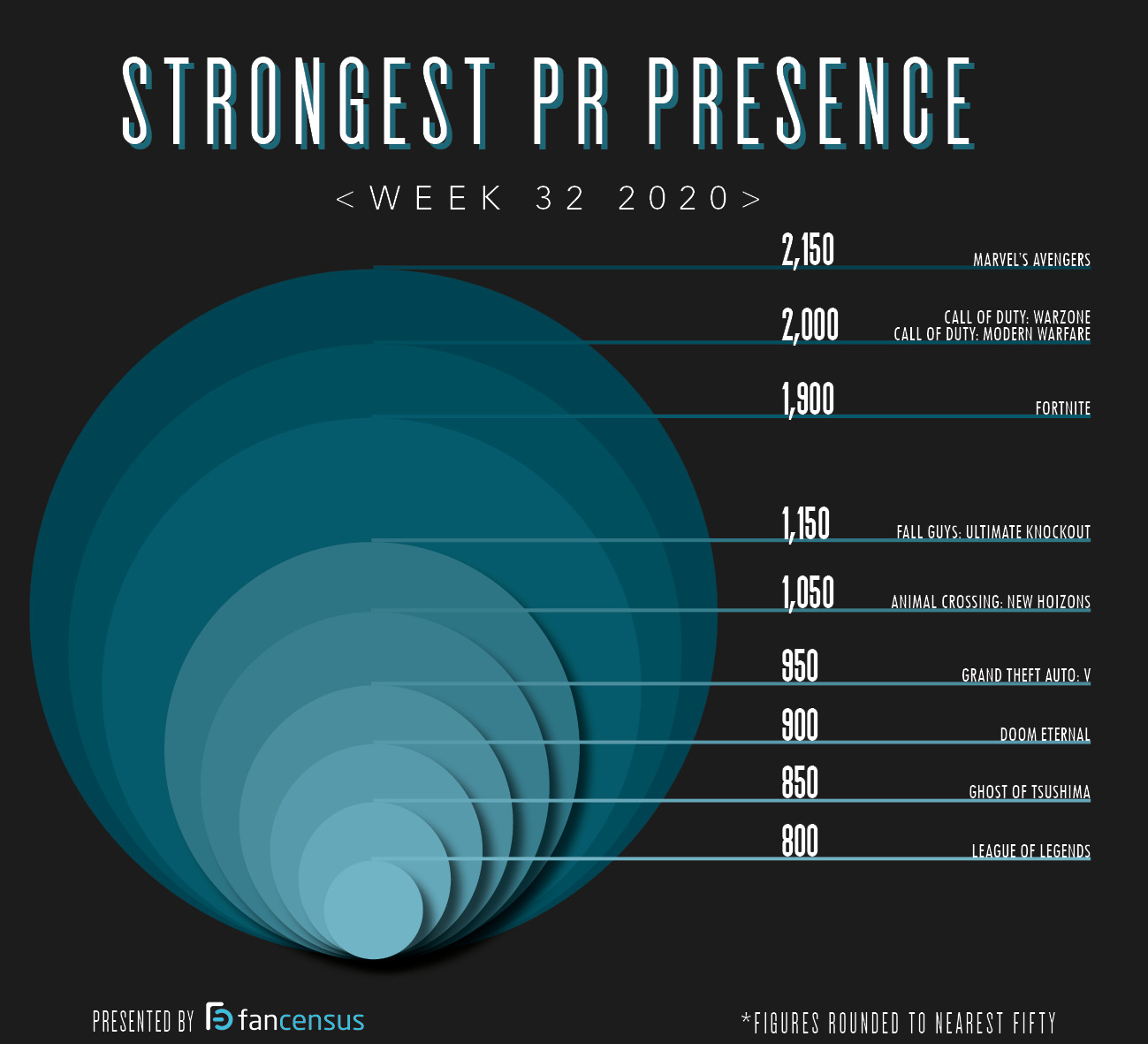 Marvel’s Avengers had a big PR week in week 32 grabbing the number one spot with help from your Friendly Neighborhood Spider-Man. The prominent topic of the week was the news that Marvel’s Avengers would launch on PS4 and PS5 with additional character Spider-Man, this led the Launch Details topic to a 24.5% chunk of the games PR. Up next was Sales/Player Numbers at 17.4% as the title continues to pre-order well leading up to its launch. Content updates were the third most talked about subject with 16.6%, articles spoke about the Playstation exclusive content and the games post launch content roadmap. Long-time Top Ten participant Call of Duty: Warzone once again snagged a position in week 32, the highly popular battle royale made it in to second. As is often the case, content updates were the driving topic for the game with 27.5% as articles discussed the titles fifth season. Patnering topic In-Game Events also made up a significant piece of the PR pie with 25.7%. The Trailer topic followed with a smaller 7.3% still relating to the Season 5 content. Where as in earlier weeks we have seen Call of Duty: Modern Warfare separated from Warzone in the Top Ten, this week it sits right below in third place. The topics for Modern Warfare broke down in a very similar fashion as the two tend to be discussed side by side in articles. There is however some variance and so the percentages looked as so: DLC/Content Update 25.2%, In-Game Event 24% and then Trailer with 7.1%. Fortnite made it in to fourth after a 25% increase in activity week on week. As per usual content updates was a popular topic for the game and in week 32 accounted for 15.5% of the press, the newly added drivable cars were well talked about. Bug/Issues/Patches/Updates was next up with 8.7% as players encountered all manner of glitches after the new content dropped. Livestream was the third most touched on subject at 8% largely because of popular streamer Ninja returning to Twitch to play the new Fornite update. A game which has exploded out the gates recently is Fall Guys: Ultimate Knockout, the Takeshi’s Castle inspired battle royale has become a smash hit, its press coverage in week 32 pushed it in to fifth. Fall Guys officially released on August 4<sup>th</sup> and the excitement surrounding the launch led the Launch Details topic to a 19.8% chunk of the games total press. As with any significant launch, reviews are a common part of the games post release PR. The Review topic made up a 12.1% share of Fall Guys’ overall coverage. Following the regular, newly released title pattern, Fall Guys third and fourth most covered topics were Guide/Walkthrough and Sales/Player Numbers with 10.4% and 9.2% respectfully. You just can’t keep Animal Crossing: New Horizons down, the slice of life sim continued its Strongest PR Presence Top Ten run with a sixth-place finish in week 32. The big news for New Horizons came by way of Nintendo announcing the title had shipped more than 22 million copies, this naturally led the Sales/Player Numbers to a hefty 35.9% chunk of the games PR. Up next was Bug/Issues/Patches/Updates with 7% are articles covered what was included in the lasted patch for Animal Crossing. Then came Bugs, although this time, a different type. Articles based on the catchable creatures were 5.9% of the games press coverage. Grand Theft Auto V is another title that has appeared in the PR Top Ten in many different weeks, this time around it snagged the seventh spot. Launch Details was the driving topic for the Rockstar money maker as details surrounding the titles launch on next gen consoles circulated, this coverage made up 24.5% of the games total. Sales/Player numbers was up next with 17.4%, articles covered both current sales charts and also the news that over 135 million copies of the game had been sold. DLC/Content Update was the third most covered topic for GTA, articles again spoke about the next gen outings, which were confirmed to feature content unique to them. A title we haven’t seen in the Strongest PR Presence round up in recent months has been Doom Eternal, the title made a return in week 32 however, grabbing the number eight spot. News dropped, at Quakecon, that Doom Eternal would be receiving new DLC The Ancient Gods, this therefore led the DLC/Content Update topic to 25.3%. Up next was Launch Details with 22.9%, alongside the DLC news there was also word on Doom’s future on the next gen consoles. The Announcement topic was up next at 11.5%, these articles spoke about all the Quakecon announcements together. Ghost of Tsushima dropped down the PR Top Ten but still managed to hang on to the number nine spot. Now a few more weeks past its launch we see a shift in the type of content being put out surrounding the game. Sales/Player Numbers was the most covered subject making up 25.9% of the games total coverage. Then came Launch Details at 8.7%, Ghost of Tsushima was featured regularly in articles which spoke about various other launches be they other titles in a similar launch window or content relating to the Playstation 5. Bugs/Issues/Patches/Updates was up next at 8.5% this came as a result of the games 1.06 patch releasing. Long-time Top Ten veteran League of Legends made it’s way in to the tenth position in week 32s Strongest PR Presence breakdown. League also got itself a patch, the 10.16 patch fixed various problems for players. The Bug/Issues/Patches/Updates topic therefore made up 15% of the games press. League of Legends was mentioned in various articles about launches in week 32, some of these included the launch of Fall Guys and also a handful of League events. The Launch Details topic was 11.1% of the games overall press coverage. A lot of Twitch news relating to LoL came out in the week, things like a deal with T1 and new Prime cosmetic rewards where touched on, this all fed in to the Livestream topic which was a 9.5% of the games. 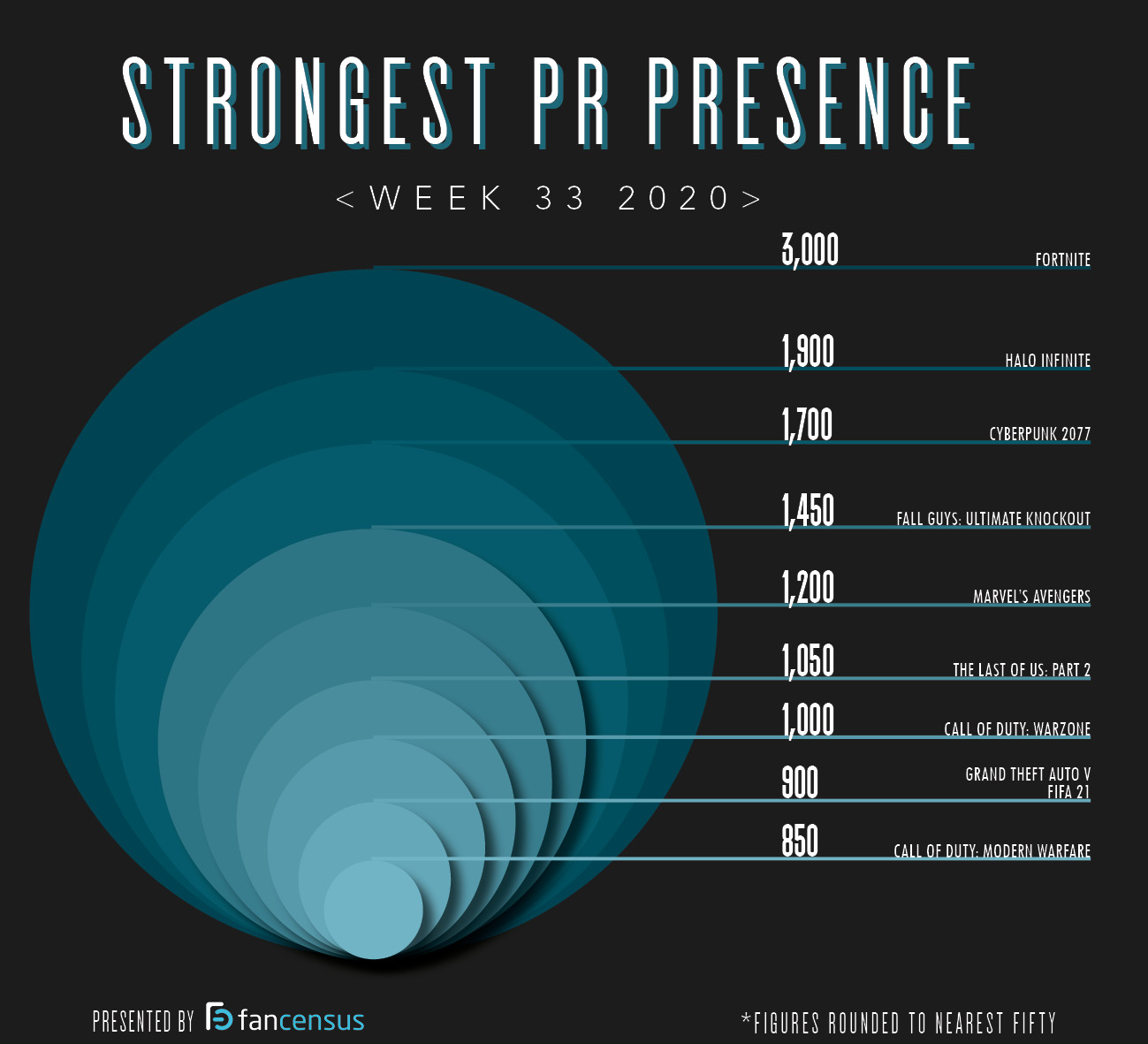