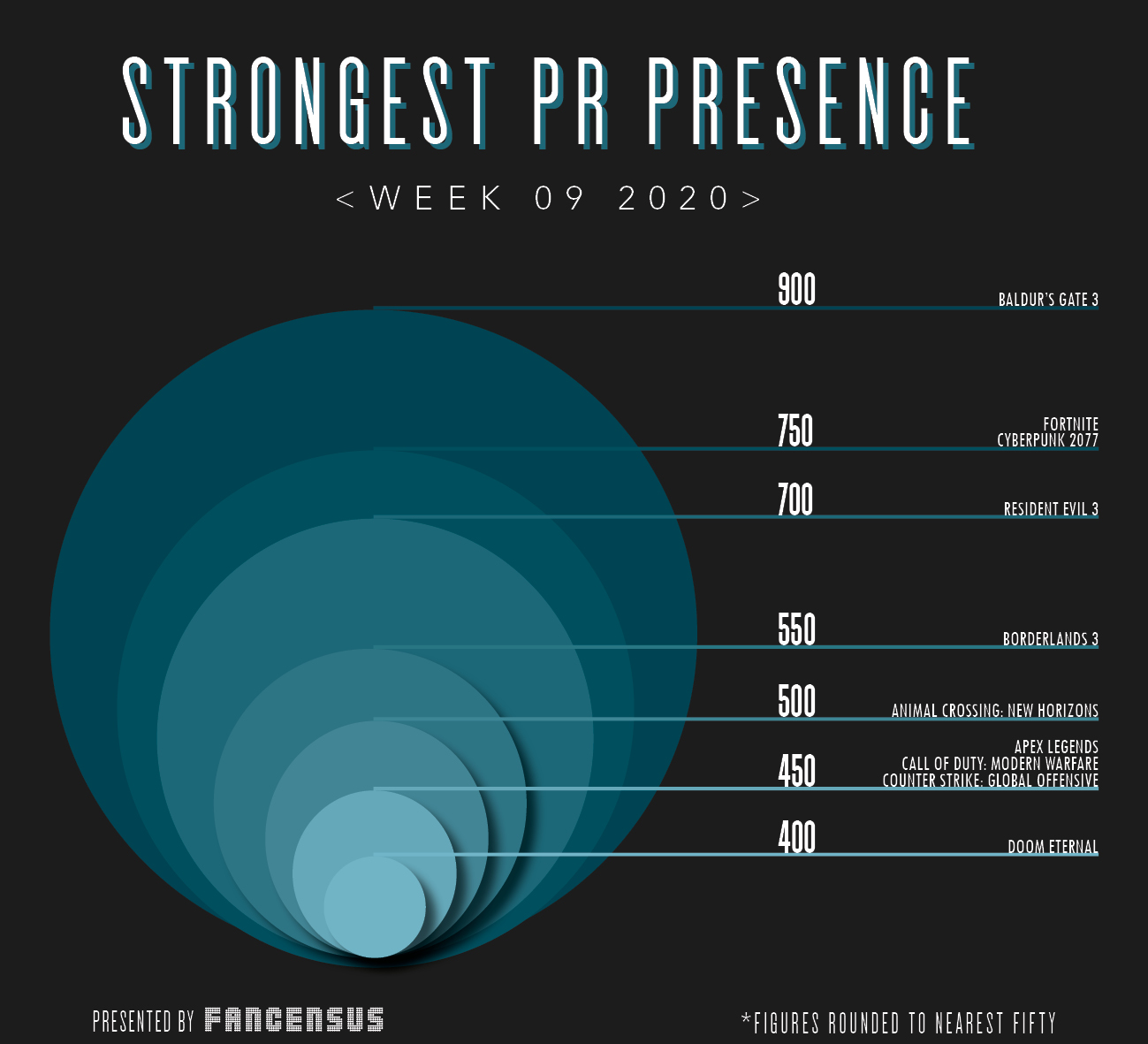 We’re starting off with a surprising entry at number one, Baldurs Gate 3. Baldurs Gate benefitted from a relatively quite press week when they dropped new details surrounding the upcoming sequel. Amongst the new information about the game was a gameplay trailer which led the trailer topic to a 21.9% chunk of the overall PR. Demo/early access/beta was 13.5% after news of the early access for the game was outlined. An opening cinematic was also released which came under the other videos subject for 12.6%. Fortnite dropped down from first to second after a 48% drop in activity week on week. More season 2 content was made available to the rabid Fortnite fans which dominated the games press activity. DLC/content update was the most covered topic at 14.6% followed by guide/how to/walkthrough at 13.3% and in-game features with 11.7%, all of which centred around the season 2 content. Up two spots from fifth into third in week nine was Cyberpunk 2077. Cyberpunk 2077’s delay hasn’t stopped the game from receiving a steady stream of press coverage and this week was no different with a variety of topics being discussed. Firstly CD Projekt Red announced their withdrawal from PAX which the other events topic hitting 13.4%, daily deals/offers was next at 12% as CD Projekt and Xbox announced any Xbox One purchasers will be able to play on Series X without a second purchase. Launch details made up 8.8% of the games press as confirmation that Cyberpunk 2077 would indeed be available on next gen consoles. Resident Evil 3 made waves with news of a playable demo being made available to the public, this news along with other smaller stories helped the game hit fourth in the top ten. The previously mentioned demo coming under the demo/early access/beta topic accounted for 33.9% of the PR. The trailer topic was 14.8% of the overall press as new gameplay footage emerged, screenshots/artwork was the next most covered topic as imagery was made available alongside the gameplay footage. The original looter shooter’s third iteration, Borderlands 3, returned to the top ten at fifth in week nine. The main topic of conversation was DLC/content update as the second expansion, Guns, Love, and Tentacles was talked about, this accounted for 30.5% of press. Retailer was the next most covered topic at 25.3% as outlets covered the news that Borderlands 3 will be launching on Steam. Launch details took a 7.8% chunk of the PR with outlets touching on the Steam release date news. Animal Crossing: New Horizons dropped from second down in to sixth after a 58% drop in activity week on week. The biggest chunk of PR for the game at 24.4% was for the other events topic as details of Animal Crossing’s planned PAX activities did the rounds. The other videos topic was 13% of the press as new gameplay clips were released, the trailers topic was next at 9.4% as the games Your Island Escape, Your Way trailer got uploaded on official Nintendo channels. After a week out of the top ten, Apex Legends returns grabbing the number seven spot. The most covered topic was in-game features at 31% a lot of which was discussing the possible addition of Titanfall’s controversial Smart Pistol. Tech specs was up next with 11.2% after Apex was mentioned within a lot of Nvidia driver articles. Other videos made 9% of the games press as a trailer for a new collection event dropped. Call of Duty: Modern Warfare continued to drop down the rankings this time ending up in eighth. In-game features was where the bulk of the press came from at 26.3% with articles continuing to talk about the rumoured Warfare mode. Bug issues/patches was next at 10.4% as the games 1.15 update rolled out. Stages/location/areas made up 8.2% of the PR were outlets spoke specifically about the new Bazaar map which was added in with the update. In ninth after an 80% uptake in activity week on week was Counter Strike: Global Offensive. There was only really one significant topic discussed which was eSports for a massive 74.6%. A variety of eSports events were covered with no single event making up most of the conversation. The rest of Counter Strike’s PR was made up of numerous topics with only a handful of articles attributed to each. Pokémon Sword and Shield round off the top ten in week nine. Pokémon day was celebrated the world over on February 27th giving Sword and Shield a boost in PR. The most talked about topic was DLC/content updates as new future downloadable Pokémon Zarude was announced, the DLC/content update topic made up 21.3% of the games press. In-game events was next with 13.4% as a shakeup in available raid Pokémon was also rolled out as part of the Pokémon day festivities. Other video made up 10.3% of the Sword and Shield PR as Zarude was given a gameplay based announcement trailer. 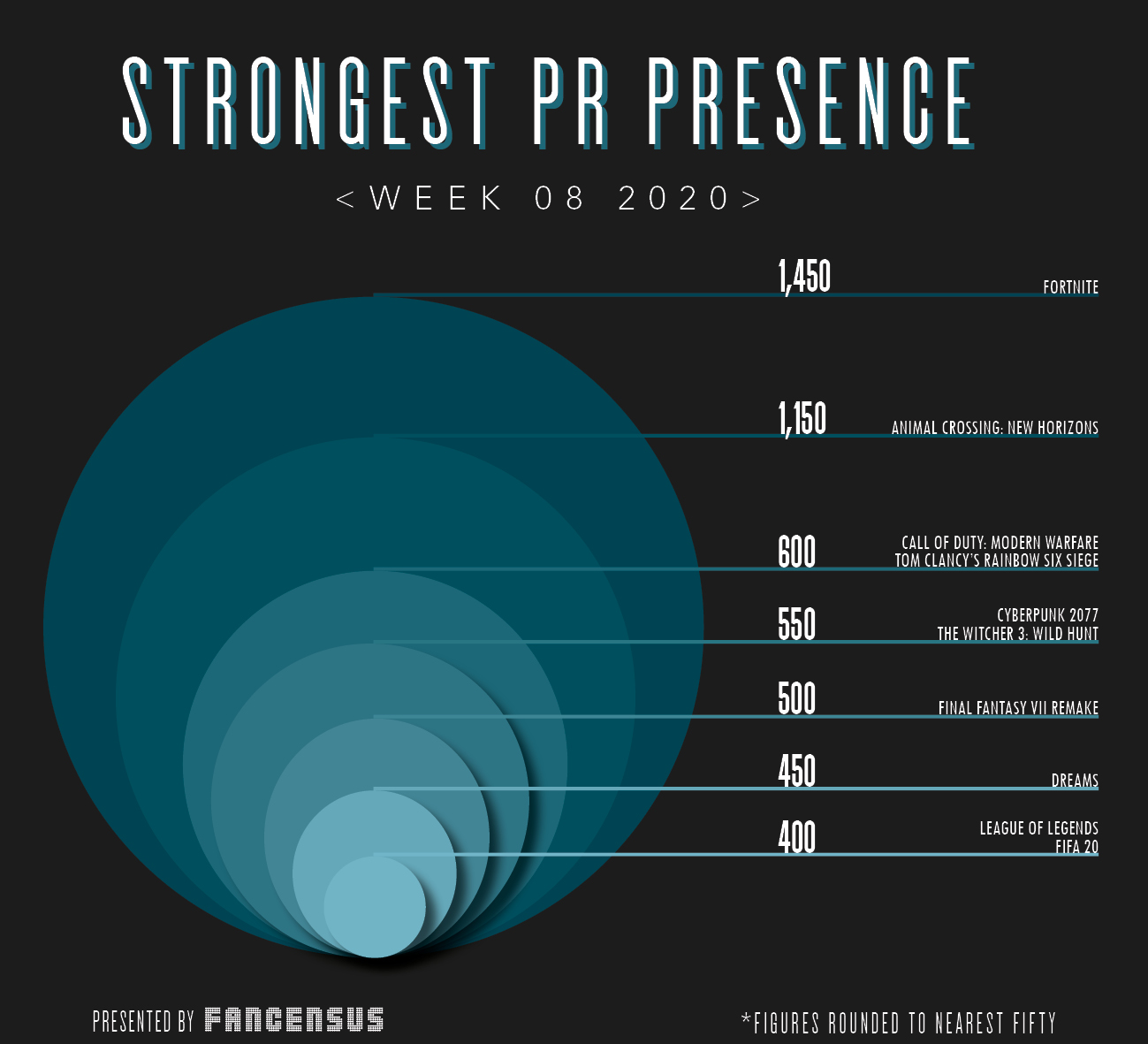 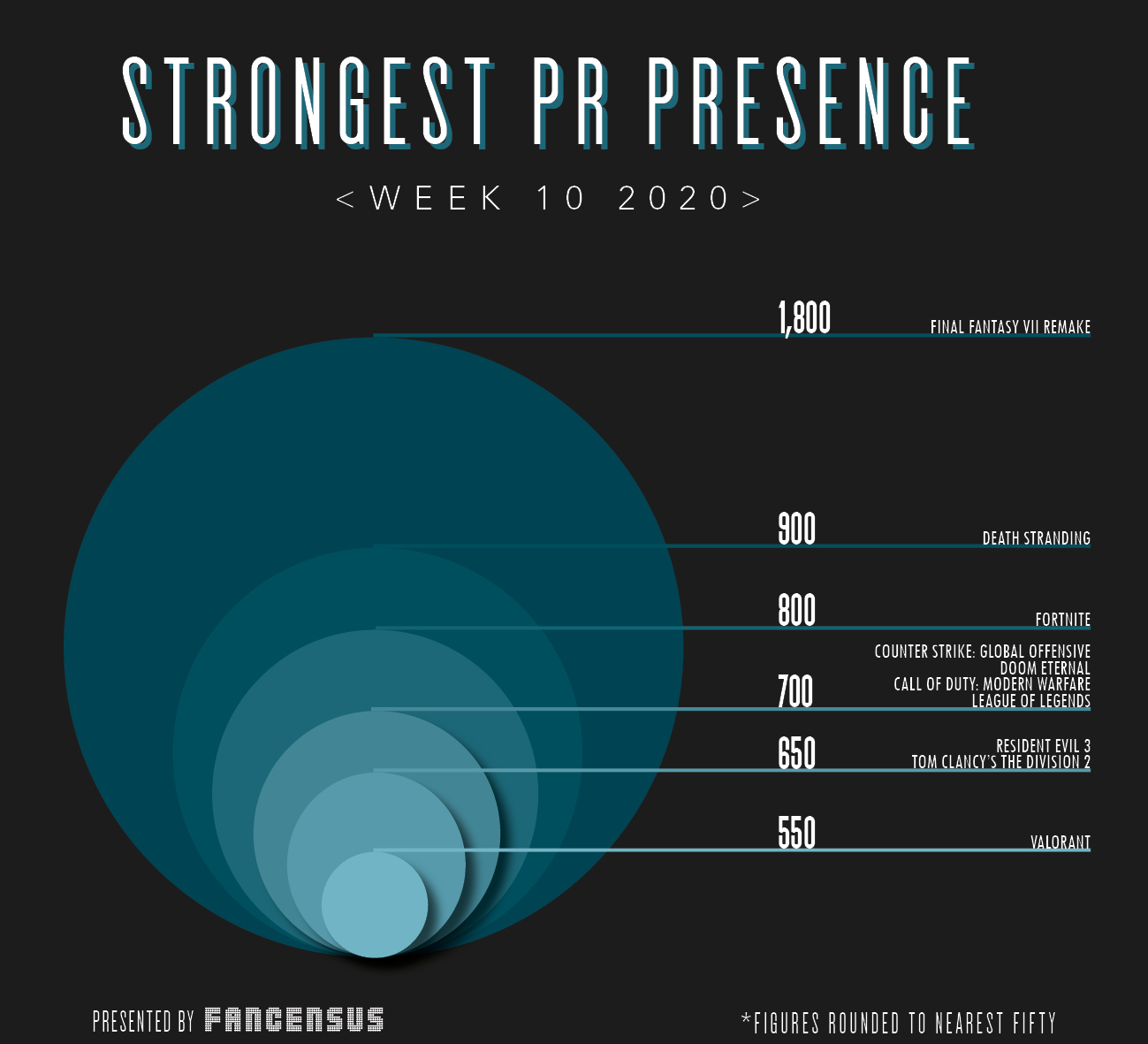