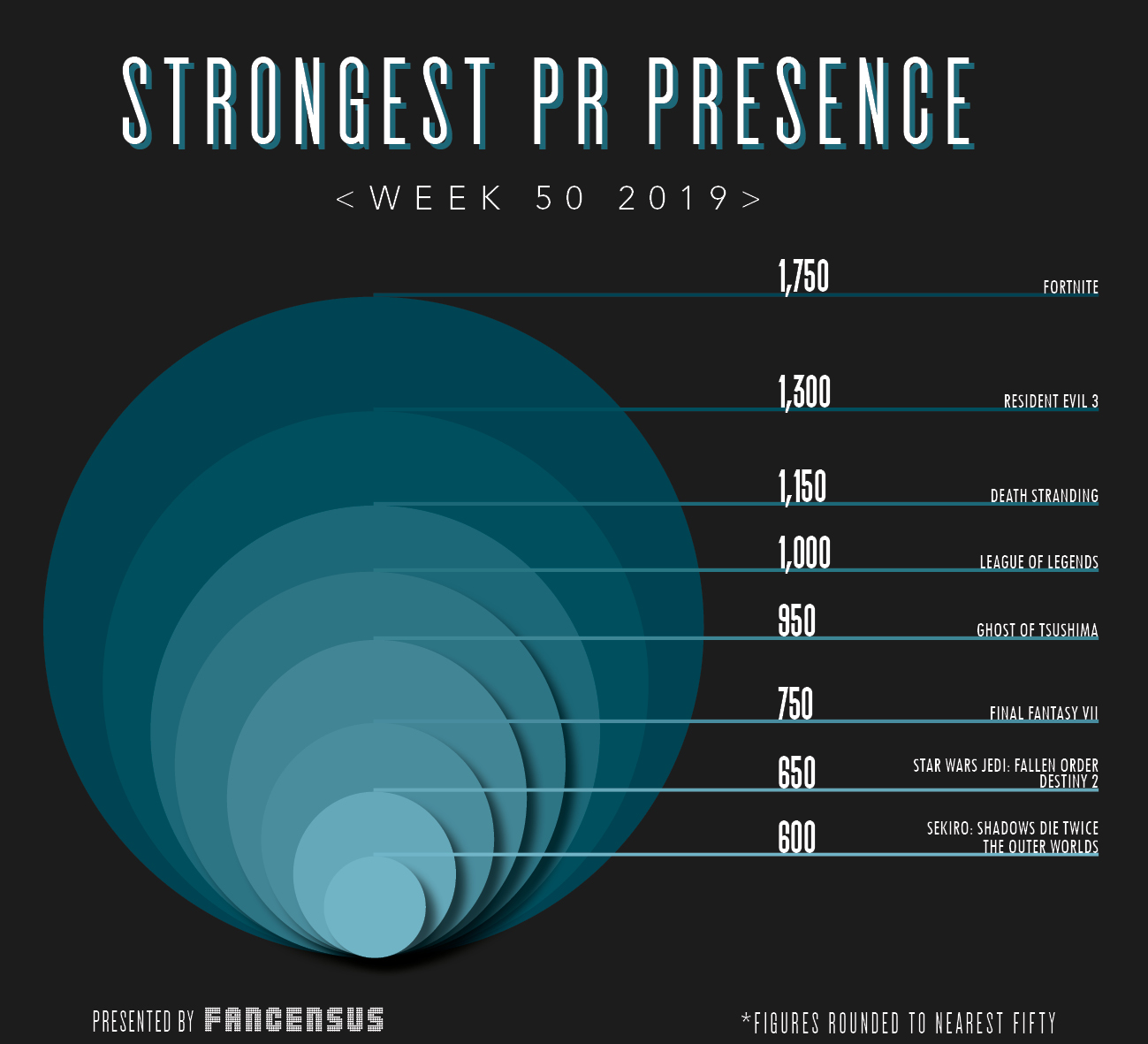 Fortnite maintained first position in the weekly pr presence top ten. The Game Awards dominated the week 50 PR and as such the largest chunk of Fortnite’s PR, at 22%, was on the topic of events and cutscenes. Further details of the Star Wars x Fortnite cross over event were revealed at The Game Awards which led to 16.9% of the games PR focussing on the subject of in-game event. As is often the case eSports was a well covered topic for Fortnite making up 13.2%.

Up from fifth to second is Resident Evil 3 after an official announcement was made in week 50. The trailer dropping with the games announcement led to the topic of trailers, video & gameplay making up 23.1% of PR. Events & conferences was the next most popular topic at 17.1% followed by launch details at 16.5%, all of which relating the games reveal.

Death Stranding remained a highly talked about title once again in the previous week, making it into third. The Game Awards and Death Stranding were frequently mentioned hand in hand during week 50 which meant that the events & conferences topic was 42.3% of the games PR. Kojima’s first project away from Konami bagged three awards from The Game Awards which was reflected in the PR as awards, rankings & lists accounted for 13.7%.

Fourth place was taken by League of Legends, improving its position week on week by two places. Once again eSports was the most featured topic at 29.7%, then events & conferences at 19.4% and announcements at 13.4%. New League of Legends spin off games were announced at The Game Awards, hence the increase in PR on the topics of events & conferences and announcements.

The world finally saw more of Ghost of Tsushima through trailers at both State of Play and The Game Awards, the uptake in PR pushing Playstation’s upcoming sword swinger into fifth. Huge chunks of the games PR were on the topics of events & conferences as well as trailers, videos & gameplay accounting for 46.3% and 32.7% respectively. Even without a concrete release date 10.5% of PR came under the subject of launch details.

Final Fantasy VII was another title which had a Game Awards heavy PR week, taking the sixth position. The breakdown of topics was similar to other Game Awards titles with trailers, videos & gameplay coming out on top with 32.1%. Launch details was up next with 28.5%, followed by events & conferences at 26.8%.

Jumping up from ninth in to seventh in week 50 was Star War Jedi: Fallen Order. EA’s better received intergalactic adventure gained a photo mode which led the in-game features topic to 33.5% of press, launch details followed with a 13.7% share and then sales & player numbers as the performance of the release was discussed.

Destiny 2 returned to the top ten after a couple of weeks of absence, taking up the eighth place. Winning the Community Support award at The Game Awards, Destiny 2’s most covered topic was events & conferences at 30.3%, eSports followed it with 14.1% and then guides, how to’s & walkthroughs with 11.1%.

Taking home the biggest award from The Game Awards and coming in ninth was Sekiro: Shadows Die Twice. Events & conferences was the most covered topic for Sekiro making up 48.1% of the games PR, awards, rankings & lists then followed with 16.8% and then eSports at 14.1%. A lot of the articles Sekiro was mentioned in also spoke about the eSports awards that were also given out at The Game Awards.

The Outer Worlds finished off the top ten after experiencing a 283% increase in PR activity week on week. Outer Worlds also picked up a couple of nominations at The Game Awards but no awards, the mentions regarding the nominations were enough to make the topic of events & conferences the most covered with 33.1%. Upcoming additional content was announced for the game contributing to the DLC & content updates subject making up 15.6% of the PR and then awards, rankings & lists made up 11.8%. 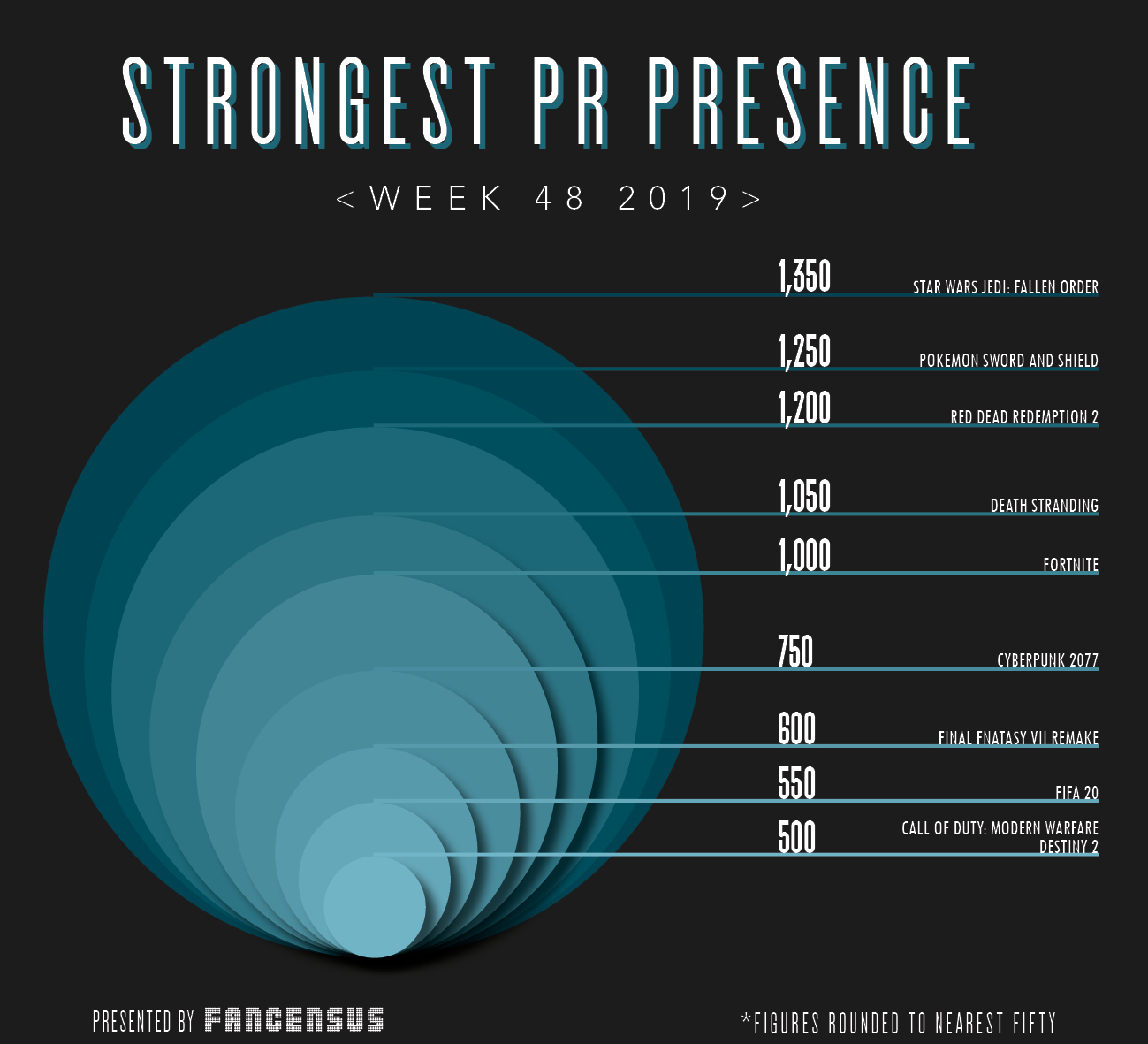