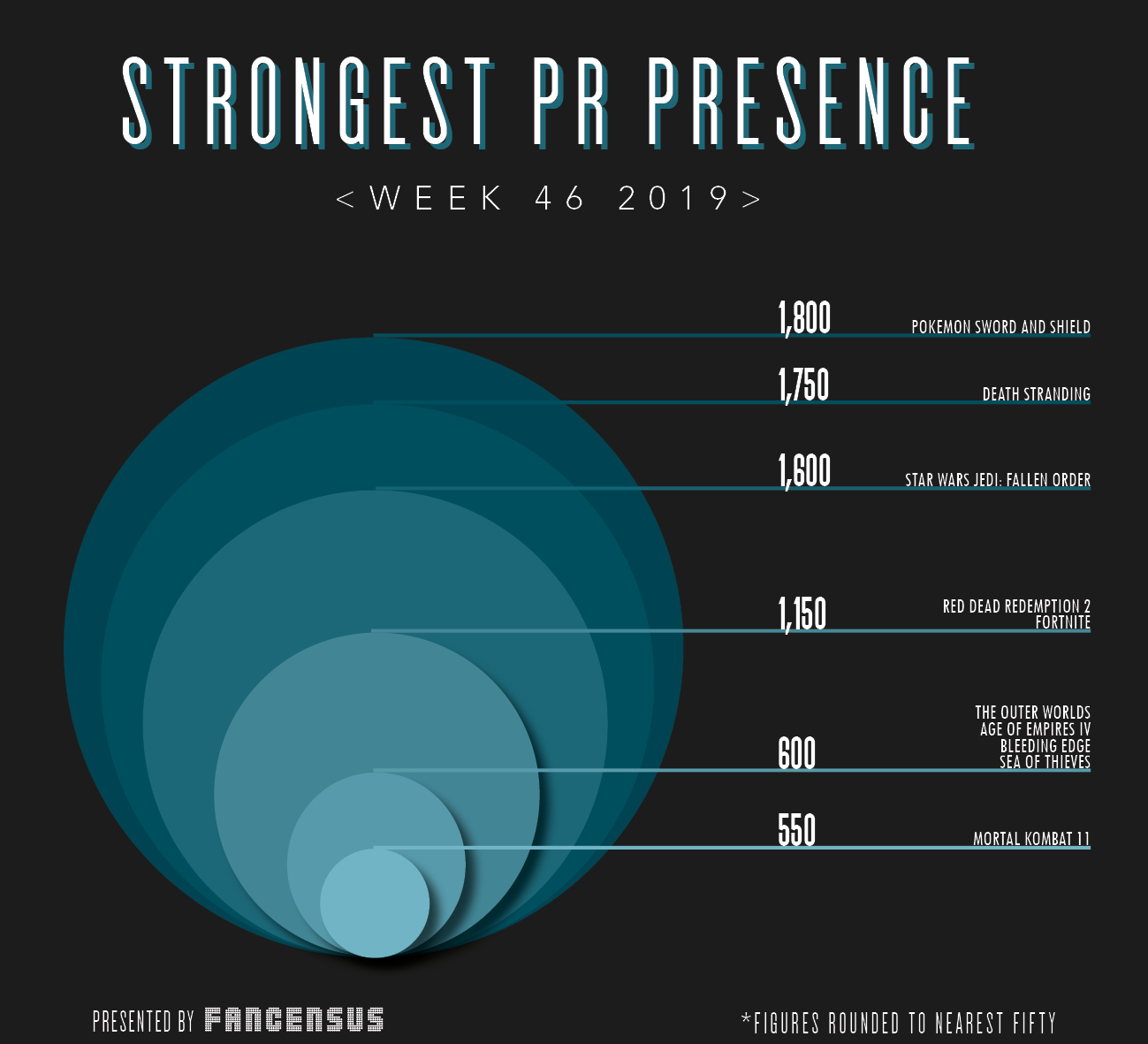 Trainers prepared to descend upon the Galar region in week 46, pushing Pokemon Sword and Shield into first position in the PR top ten. Guides, how to’s and walkthroughs were the most talked about topic at 29.1%, while 12.2% of PR was focussed on trailers, videos and gameplay. Naturally for a week of release reviews featured heavily making up 10.2% of the press.

Death Stranding dropped from first into second in week 46. Much like Sword and Shield, large chunks of the PR for Kojima’s polarising new project came by the way of guides, how to’s & walkthroughs, along with reviews, equating to 17.3% and 9.9% respectively. Sales and player numbers were the next most discussed topic at 8.3%.

Another title which was gearing up for release in week 46 was Star Wars Jedi: Fallen Order. Respawn Entertainment’s first debut outing with the Star Wars brand experienced a 357% increase in PR which featured the following; 14.8% from reviews, 12.1% based on retailers and 11.7% talking about guides, how to’s & walkthroughs. Another 9.8% spoke specifically about launch details.

Red Dead Redemption 2 gained steam moving from ninth up in fourth a week after launch. The usual post-launch discussions dominated the games PR which included launch details at 22%, bug issues & patches at 11.8% and in-game features at 10.5%. It’s not surprising to see bug issues & patches mentioned so frequently with the game’s issues launching from the Rockstar launcher and crashing for numerous reasons.

A PR top ten would not be complete without Fortnite, in week 46 Epic Games evergreen battle royale placed fifth. 13.6% of its PR spoke of eSports with its recognition at the Golden Joysticks, in-game features accounted for 8.4% of the PR and 8.1% touched on launch details as Fortnite was mentioned alongside the newly launched Battle Breakers.

Returning for another week, this time up to sixth, was The Outer Worlds. In week 46 the PR shifted towards in-game features and announcements thanks to mentions in articles talking about Obsidian’s new title, followed by DLC & Content Updates, as The Outer Worlds was also mentioned within articles covering upcoming additions to Game Pass. In-game features was 16.2% of the PR, announcements 13.4% and DLC & content updates 13.2%.

Weeks 46’s first new entry was Age of Empires IV, in seventh position the beloved RTS game benefitted from the release of new gameplay footage at XO19, taking the trailer, video & gameplay topic up to 60% of the PR. Launch details was the next most talked topic with 7.8%, followed by announcement at 6.9%.

Bleeding Edge also made an appearance at XO19, the resulting PR put Ninja Theory’s brawler into eighth. The games release date was announced at the event which led to the launch details topic totalling 30.1% of the PR, DLC & content updates was the next most covered topic at 17% followed by trailer, video & gameplay for 16.2%, as press spoke specifically about the gameplay footage shown at XO19.

Also at XO19 was Sea of Thieves with news of new content update Seabound Soul. 18.9% of PR talked specifically about the announcement, 16.1% on the topic of DLC & content updates and finally 16.8% on the subject of trailer, video & gameplay with articles sharing and commenting on the gameplay footage shown at XO19.

Mortal Kombat 11 finishes off the top ten as the game experienced a PR boost with its inclusion on the Stadia launch line up. Launch details therefore was the most talked about topic at 36.7%, another significant Mortal Kombat happening in week 46 was the reveal of new DLC character Sindel, the reveal led to trailer, video and gameplay reaching 34.1% of the games PR. DLC and content update was the next most discussed subject at 6.7%. 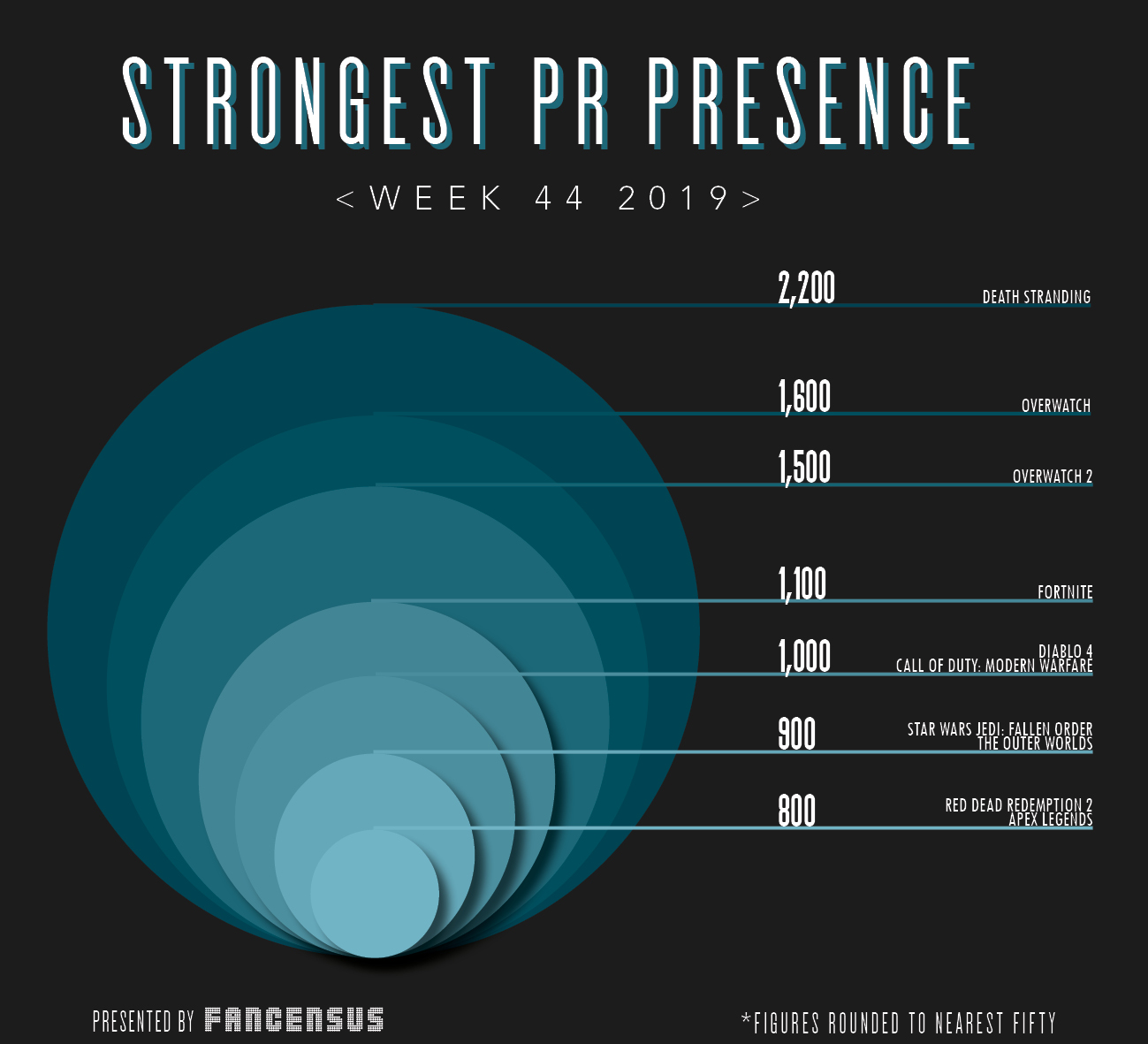