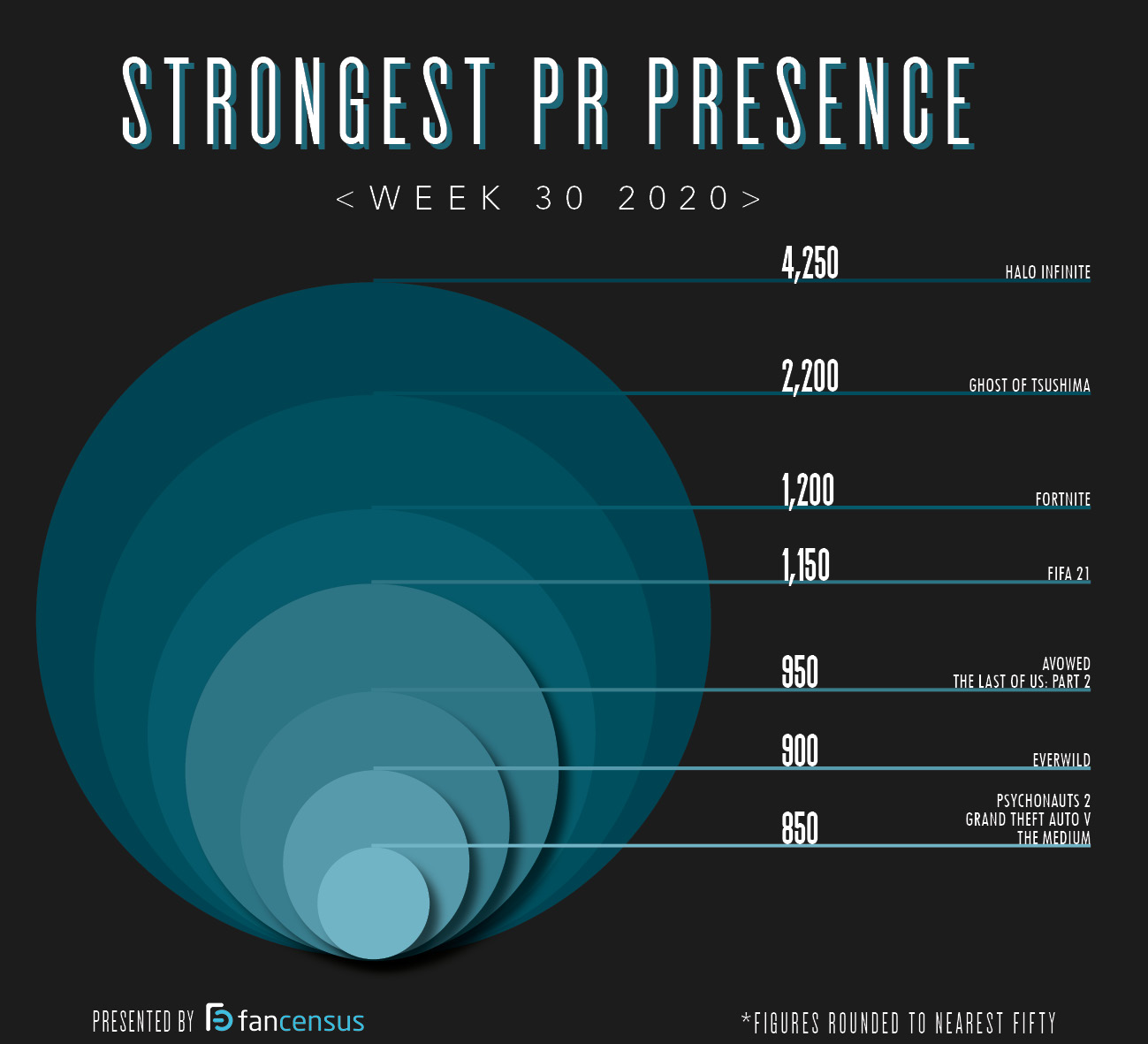 Fresh off the back of the Xbox Games Showcase it’s of no real surprise to see Halo Infinite grabbing the number one spot in the Week 30 Strongest PR Presence top ten. The biggest subject covered when discussing the next Halo outing was Xbox Games Showcase July at 17%. Up next it was Gameplay with 13.3% as articles discussed what took place in the first reveal of Halo Infinite gameplay footage. Announcement was the third most discussed topic at 10.2% a lot of the articles under the Announcement topic spoke about the Games Showcase overall and mentioned Halo Infinite alongside newly announced titles. Ghost of Tsushima has maintained a spot in the top ten for a few weeks now, in week 30 it made it into second. Just a week after its launch the title acquired coverage in typical areas one would expect, the breakdown looked like this; 23.3% Sales/Player Numbers, Guide/Walkthrough at 14.8%, Launch Details with 6.9% and then Leak/Spoiler/Rumour/Speculation at 6%. Up in third in week 30 was Fortnite. Obviously, it doesn’t matter what is happening in the wider world or in the gaming world, Fortnite always remains a constant. The most covered topic for Fortnite was DLC/Content Update at 12.1%. Up next was Guide/Walkthrough with 8.3%, these articles were similar to the usual Fortnite content and provide players with instructions for completing in game challenges etc. Game Components followed at 7.6%, a lot of the articles under this topic were about ancient astronaut themed challenges which appear to be making their way to the famed Battle Royale. Evergreen sporting sim, Fifa 21 was able to snag the number 4 spot as new details about this year’s return to the field became available to the digital footy fans. A new trailer dropped showcasing what’s to be expected from the next title in the series and also confirmed suspicions of French player Mbappe being the cover star, the Trailer topic therefore made up 20.9% of the game’s total coverage. A flurry of screenshots also came out with the trailer which led to a 18.9% chunk of the game’s PR coming under the Screenshots/Artwork topic. The news that this reveal would take place and the subsequent Mbappe news meant that the Announcement topic was worth 14.5%. Newly announced and therefore a new addition to the top ten was fifth placed, Avowed. The Obsidian RPG got a surprise reveal at the Xbox Games Showcase and like Halo Infinite previously, its most talked about subject was Xbox Games Showcase July with 32.1%. Unlike Halo, however, there was no gameplay to be seen so the Announcement topic took second with 22.5%. As one might expect the Trailer subject was up next and for Avowed that was a 12.4% piece of the PR pie. The Last of Us: Part 2 continues to find itself in the Strongest PR Presence rankings and this time round the game grabbed the number 6 spot. A rather large 32.5% of the Last of Us 2 press came under the Sales/Player Numbers topic, the game continues to place well in sales top tens around the world. Up next was Launch Details at 10.2%, The Last of Us: Part 2 was mentioned within a range of articles some on the launch of the Playstation 5 and some others on the change in Metacritic’s user reviews rules put in place to prevent review bombing upon a games launch. The Storyline subject came up next with a smaller 4.4% as writer Neil Druckmann revealed he had planned to make the games story much darker early in its development. Another newly announced title from the Xbox event was Everwild, it made it into seventh in the Strongest PR Presence Top Ten. Like other games featured in the event, Everwild’s PR coverage fell under the following categories; Xbox Games Showcase July at 37.5%, Trailer with 26.1%, Announcement for 9.6% and then smaller chunks on a range of other topics starting with Launch Details at 3.3%. Psychonauts 2 despite previously being announced, also made an appearance at the Xbox Games Showcase and this exposure helped the title make it into eighth in week 30. Like Everwild, Psychonauts 2’s press coverage fell in the same pattern albeit in slightly different amounts. Xbox Games Showcase July as a topic made up 29.7% of the games press, Trailer sat at 21% after a rather psychedelic Gameplay Music Trailer was played for the viewing masses and then came Announcement with 7.5% for obvious reasons. No stranger to the Top Ten is Grand Theft Auto V, the seven-year-old title went from strength to strength in week 30 and made it into ninth. Bug/Issues/Patches/Updates was the most covered subject for the game as Rockstar announced upcoming updates for both GTAV and Red Dead Online, the subject accounted for 13.8% of the games PR. The Announcement topic made up 9.5% of the Grand Theft Auto V press again touching on the news about the upcoming updates. DLC/Content Update was up next with 8.5% where articles drilled deeper on the content teased by Rockstar. Finally, in at number ten, another Xbox Showcase title, The Medium. The Medium was another game which had been previously revealed but this time around we got to see a bit more of the title, this resulted in the Trailer topic being the most touched on at 21%. Xbox Games Showcase July was up next at 18.4% then followed Gameplay at 17.7% as The Medium showed of some of its unique gameplay elements whetting the appetite of the Xbox fans. 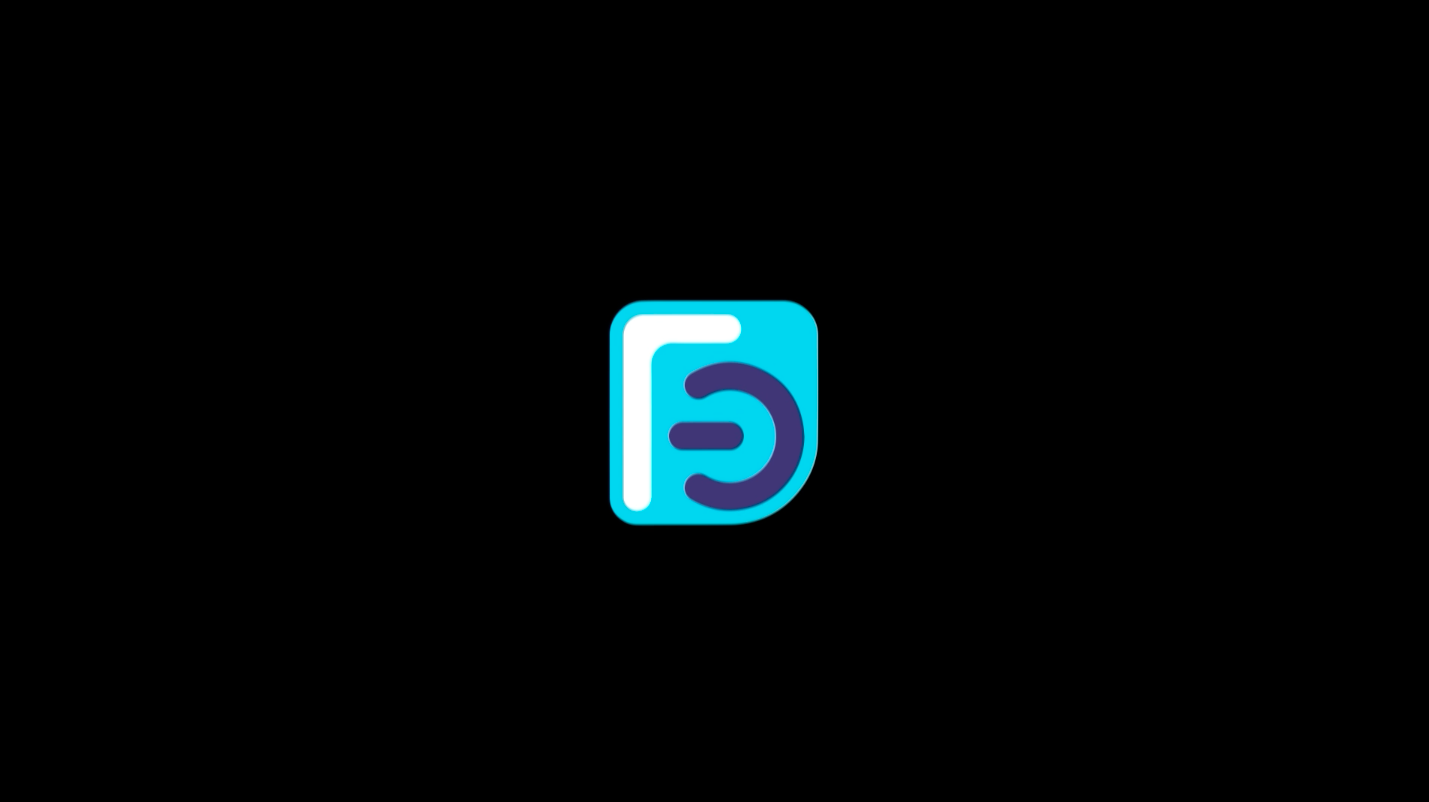