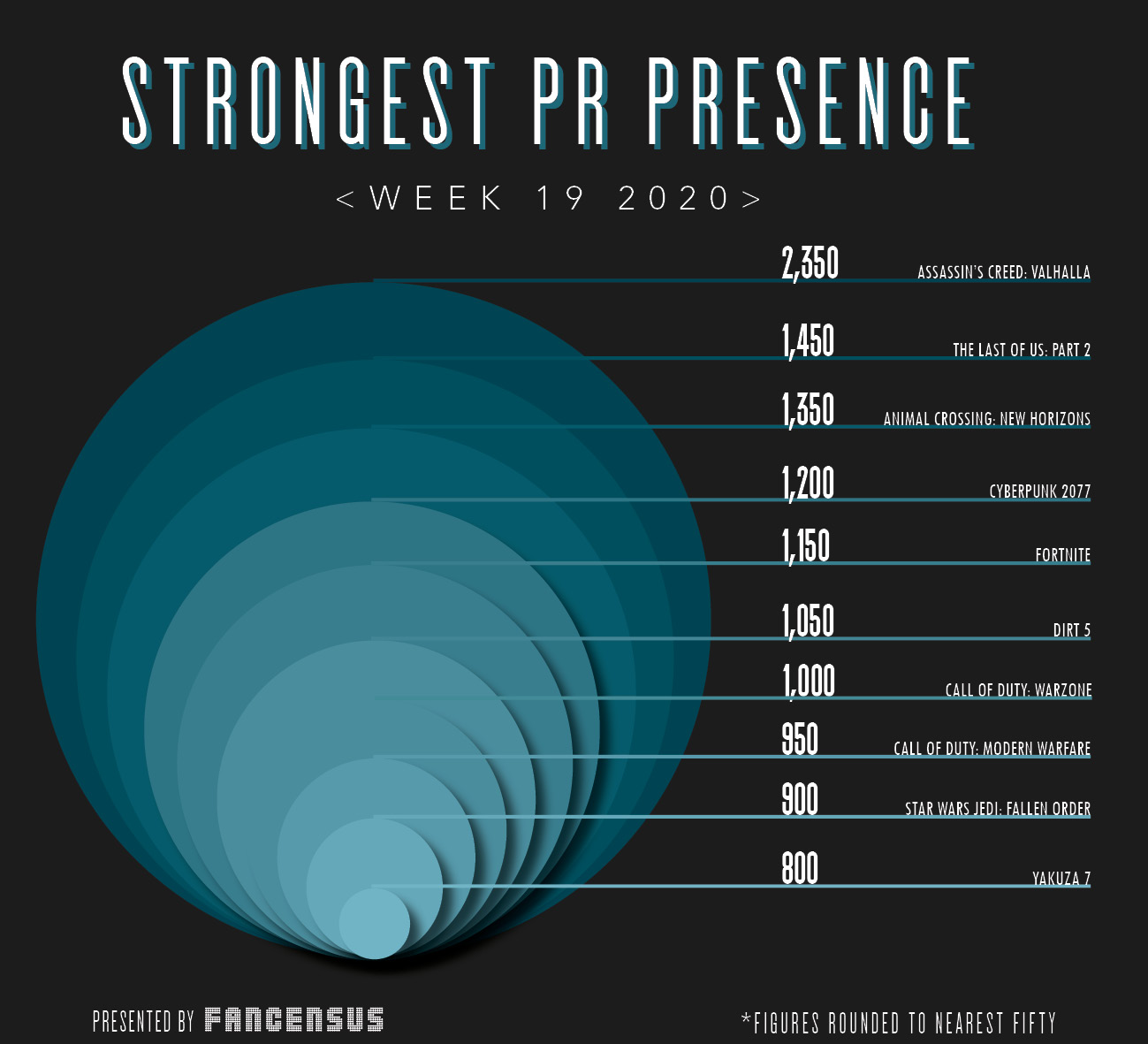 Assassin’s Creed: Valhalla maintained its number one position for a second week as excitement for the next series entry remains high in the gaming world. Covered topics shifted as additional information about the title released, the most popular topic being gameplay with 28.9%. The trailer topic made up 17.6% of the coverage followed by announcement which shrunk to 11.5%

Also holding position despite a 17% decrease in activity was The Last of Us: Part 2. Naughty Dog started a regular video upload campaign as the games release date draws closer, the trailer topic therefore was a sizeable chunk of the overall coverage at 43%. The leak/spoiler/rumour/speculation subject dropped of significantly ending up at 11.2%. The gone gold topic was up next with 7.7% as it was reported TLOU2 left the developers hands in week 19.

The hero of the gaming worlds lockdown period, Animal Crossing: New Horizons, has remained in the top three since launch and in week 19, once again, held the number three spot. Whilst the position stayed the same the topics covered by the press changed, the most covered being sales/player numbers at 37.2% as the game battled for position near the top of the sales charts in a number of countries. The previous weeks most covered topic guide/walkthrough this time made up a slightly smaller 25.8% of coverage followed by bug/issues/patches/updates for 5.2%.

Fourth place in week 19 belonged to Cyberpunk 2077. As we’ve seen previously any tiny detail made available about CD Projekt’s futurist RPG immediately brings the title back to the press centrefold. The Night City Wire, presumably an event releasing further game intel, was announced to be apart of the Summer Games Fest line up, this news led the announcement topic to a 18.5% share of the action. Launch details made up a further 11% of coverage, again on the same news stories and then microtransactions/loot boxes with 7.5% as details surrounding the transactional content featured in the game were made public through a ratings board’s evaluation.

Fortnite claimed a lower than normal fifth place with a similar amount of coverage as the game is used to. eSports was the most talked about topic with 15.7%, followed by DLC/content update for 8% and then launch details with 6.5%, most which came from articles focused on other titles but mentioning Fortnite somewhere on the page.

A new entry grabbed the sixth spot in week 19, Dirt 5 was announced during Microsoft's Inside Xbox show. As you would expect the announcement topic was where the bulk of the press came under, to the tune of 41.4%. This was supplemented by a further 15.4% under the trailer subject and then a 9% chunk which belonged to the launch details topic. The gameplay and technical specs made up 8.1% and 5% respectively, again tying in to the announcement and its accompanying trailer.

Call of Duty: Warzone managed to shut out it’s full game counterpart to grab the seventh spot, a switch in the usual Call of Duty standings. The most discussed topic was bug/issues/patches/updates with 14.6% as a whole variety of niggles were outlined in various articles. Next up was launch details at 14%, outlets covered details about the battle royale’s jump to next gen consoles. Sales/player numbers made up a 11.4% chunk of the games PR, the Warzone player count tipped over 60 million.

In a close eighth was Call of Duty: Modern Warfare, similar topics were covered within the games coverage but the breakdown was different to Warzone. The biggest topic for Modern Warfare was sales/player numbers, Modern Warfare drew coverage from its features within the sales charts and also articles talking about the fact it has now become the best-selling COD of all time. Bug/issues/patches/updates was 14.7% of Modern Warfare’s PR, much like Warzone, a variety of issues with the game were discussed. Just like Warzone launch details was a heavily covered subject with the next gen jump featuring frequently, the topic was worth 10.9% of the overall.

May 4th is of course Star Wars day which often leads to info dumps on the extensive range of Star Wars media. Star Wars Jedi: Fallen Order unexpectedly picked up a large amount of coverage which in turn pushed it in to ninth. DLC/content update was the dominant topic here as whole host of new in game features where announced to be making their way to the game, this coverage made up 34.4% of the total. Sales/player numbers was the next most touched upon subject, much like other games in the top ten, Fallen Order remains in the sales charts and there for featured in related articles. The launch details topic was 6.7% of the games overall PR, discussion linked to the DLCs launch.

By far and a way the largest uptake in coverage week on week was attributed to Yakuza 7, which picked up the tenth spot. Yakuza 7 experienced a huge 19,000% increase in activity as details of the western launch of the title did the rounds via a Steam leak and the games inclusion in the Inside Xbox event. The launch details accounted for 31.8% of the game’s coverage followed by announcements at 17.7%. The announcement within the Inside Xbox showcase featured a trailer leading the topic of the same name to 16.2% share of the PR. 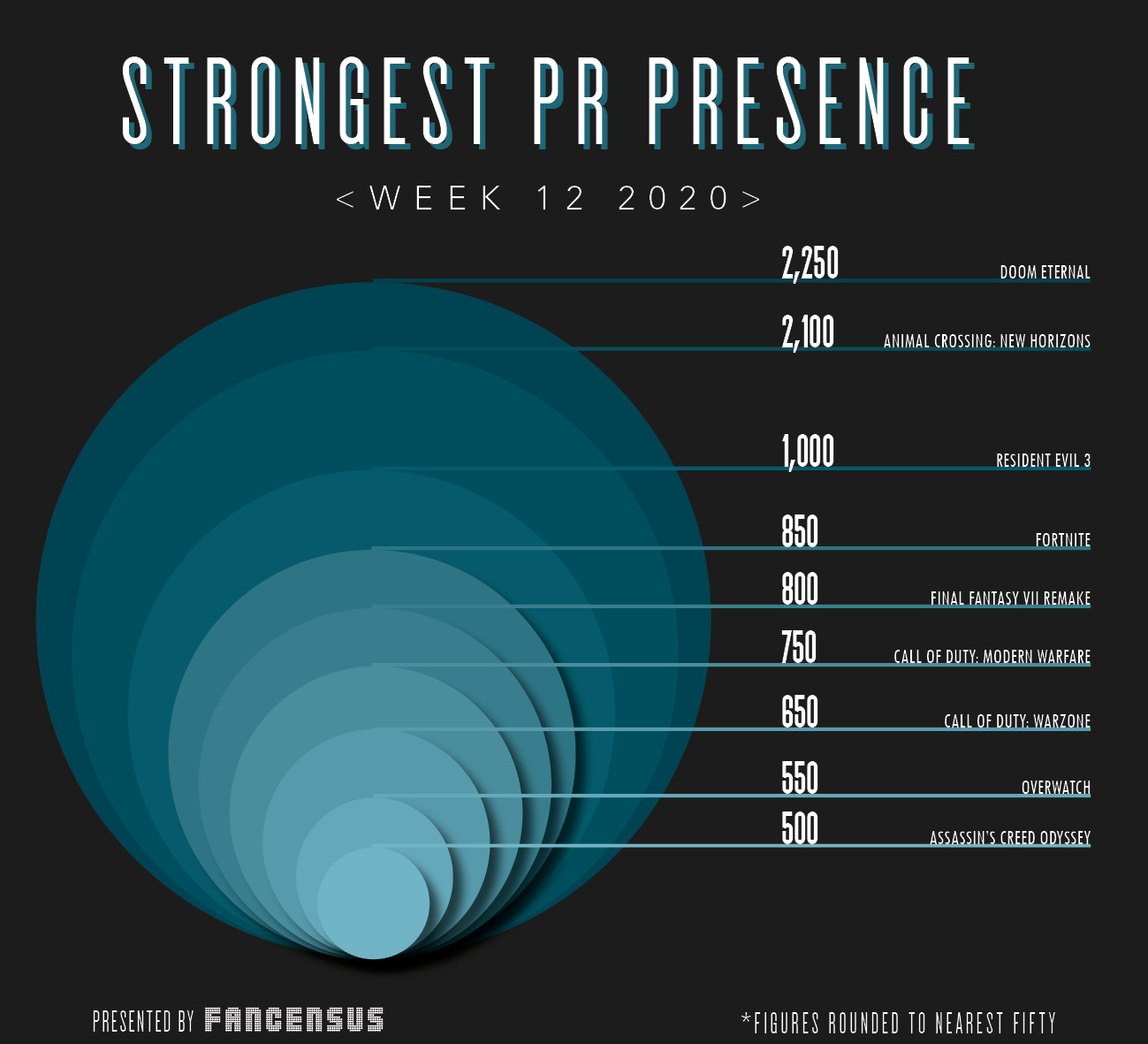 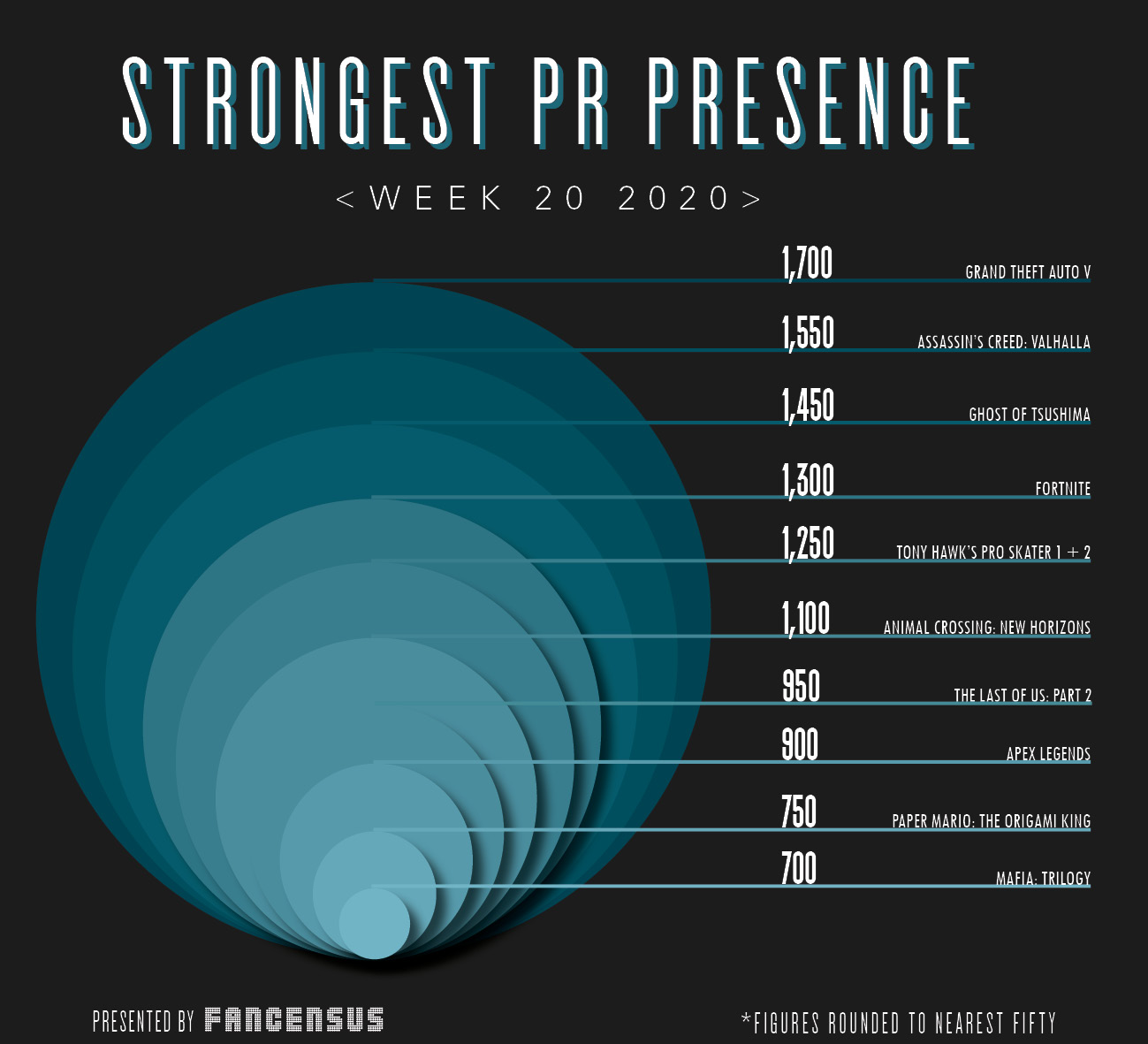