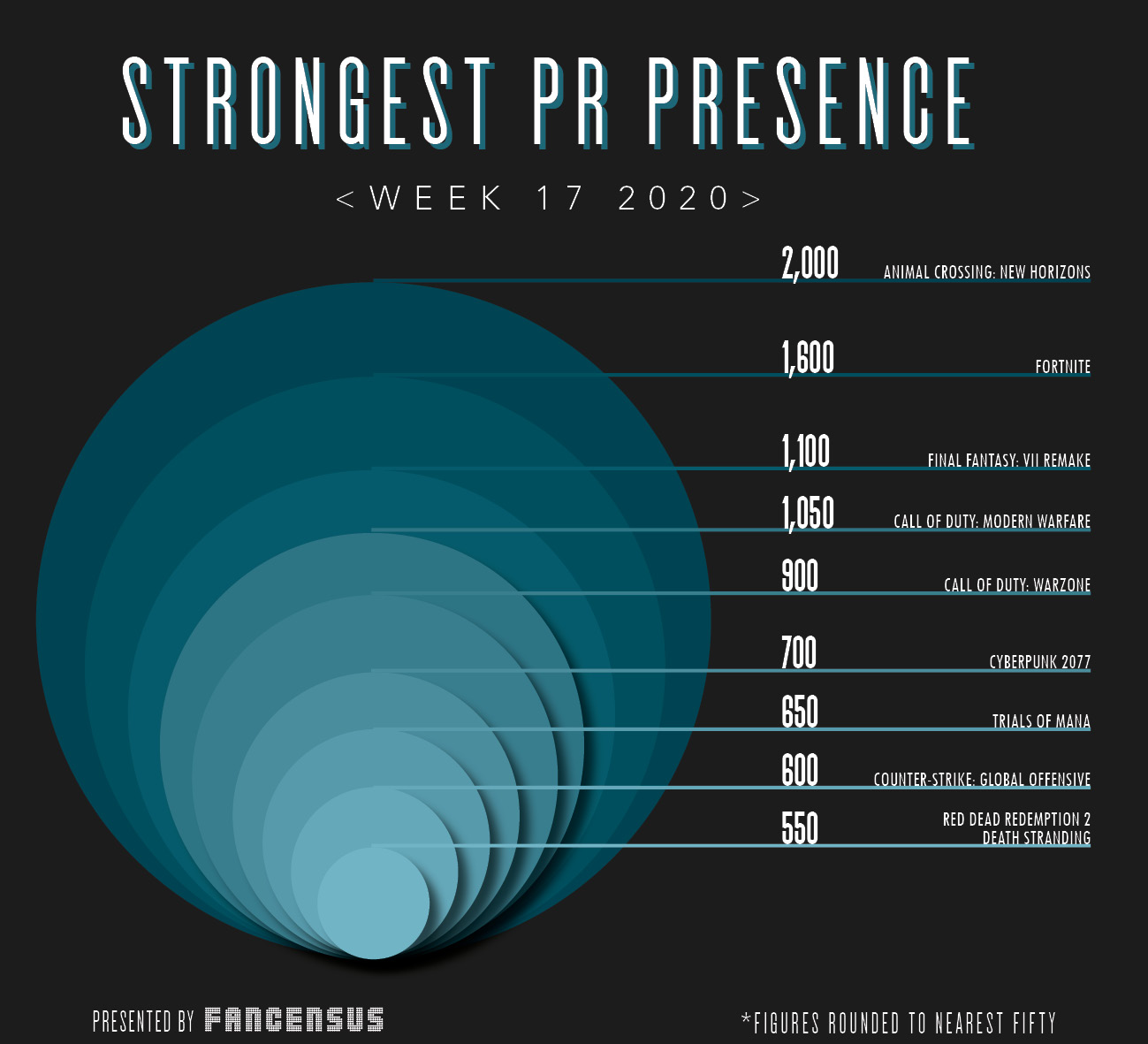 Week 17 was a pretty hardy press week as releases have slowly picked up and next gen excitement continues to grow. Coming out on the top of the pile was Animal Crossing: New Horizons. New Horizons has maintained strong placing since launch and in the previous week the coverage broke down as follows: guide/walkthroughs at 19.9%, sales/player numbers at 19.1% and DLC/content update at 12.9% as Nintendo continue to push out seasonal content. In second place was Fortnite, as is the norm the battle royale colossus managed to maintain prominent placing even within these unusual times. The most covered topic for Fortnite was eSports for 11% as the game was mentioned alongside Valorant in articles about ESPNs upcoming event which would feature pro players from various games. The guide/walkthrough topic made up 10.4% of press, a lot of which outlined how players would be able to witness the in-game Travis Scott concert. Launch details were up next with 9.1% as news spoke about Fortnite making it’s way to Google Play Store amongst other platforms. PR for the Final Fantasy VII Remake dropped off slightly compared to the previous week sitting at -21%. Square Enix’s reimagining of the classic managed to snag the third spot regardless with help from content on the sales/player numbers topic which accounted for 27.6% of the games overall press. Guide/walkthrough was up next with 12.6% and then review at 8%. Call of Duty: Modern Warfare is another title which is never too far from the number one spot, in week 17 it grabbed fourth. The most prominent story picked up by press in the week was about cross play causing issues for console players as they became targeted by PC players with the hardware upper hand. Different articles approached this debacle in different ways which led the topic breakdown to look like this: 13.2% modes/interface, 11.6% cheating and then general opposed at 9.4%. The PC cross play scandal didn’t just stay with Modern Warfare, it also affected Call of Duty: Warzone which took fifth. Warzone had a lower number of articles than Modern Warfare but the topics covered were much the same but broke down in to larger chunks. 19.3% came under the cheating topic, modes/interface made up 17.2% and then general opposed at 15.5%. Cyberpunk 2077 returned to the top ten in week 17, managing to get up into sixth place. The reveal of Cyberpunk branded Xbox hardware caused a bit of a stir with the fans and media outlets alike and dominated the games press. Special editions was the most covered topic with 27.9%, next was launch details with 11.9% and then announcements picking up 10.9%. In at number seven was Trials of Mana which released at the tail end of week 17. Trials of Mana got the usual breakdown of coverage you would expect from a game in release week which was as follows: reviews 19.4%, guide/walkthrough at 13.9% and then launch details with 13%. The fourth most covered topic for Trials of Mana was other videos at 12.2% as gameplay footage was released to whet the appetite of the gaming world. Another mainstay in the top ten is Counter-Strike: Global Offensive which snagged the eighth spot. As is typical for CS:GO the majority of the coverage for the title came under the eSports topic, this time around it equated to a 44.7% chunk of the overall press. What was different for Counter-Strike in week 17 though was the second biggest topic, which in this case was leak/spoiler/rumour/speculation which made up 21.5% of the total PR coverage. This comes as a result of the games source code being made available to the public through leakers. Red Dead Redemption 2 made a return to the top ten again in week 17, Rockstar’s hugely successful western romp made it into ninth. It’s not uncommon to see Red Dead returning to the charts as news spreads about the game making its way to new platforms, in new formats or at discounted prices. Week 17 was no different, the majority of RDR2’s press came under then launch details topic for 33.4% as a result of the news that RDR2 would be replacing GTAV on Xbox’s Game Pass roster. Technical came after that with 14.8%, articles touched on subjects like server issues and in-game tweaks. Another returner in week 17 was Death Stranding which grabbed the tenth spot after a 145% uptake in activity week on week. Two topics dominated the games press both of which related to the same story which was the delay of the Death Stranding PC port. These stories fell under the topics of launch delay and launch details for 35.6% and 28.5% respectively.